The Smart City Lab at National Center for Artificial Intelligence (NCAI) has successfully developed vehicle detection and classification module using Artificial Intelligence. Through this module, vehicles can be easily detected on the basis of two-wheeler and four-wheeler further classified as a truck, car or bicycle. The module will help to count the number and type of vehicles on road.

Poor traffic management effects the overall economy and health of the citizens. According to Karachi Chamber of Commerce and Industry (KCCI) 2017 report, there are more than 4 million registered vehicles in the city. According to the report, rickshaws and motorcycles have contributed in increasing the traffic chaos. These vehicles run at a very slow speed, remain on the move almost the whole day and are often wrongly parked. Encroachment, less parking facility and violation of traffic rules are also other factors for traffic congestion.

The module of vehicle detection based on deep learning is extremely effective for roads with heavy traffic flow, hospitals, educational institutes, parks and malls where managing traffic is difficult. By applying this method, users can achieve data related the number of vehicles parked and the space available. The user will get information of the number and types of vehicles on the screen by deploying cameras on the field.

The team is currently evaluating different parameters related to the vehicle, such as the speed, car make etc. Number plate identification is also being incorporated for identifying certain cars when there are in a particular vicinity within the city.

Face Detection: One Solution for an Effective Monitoring 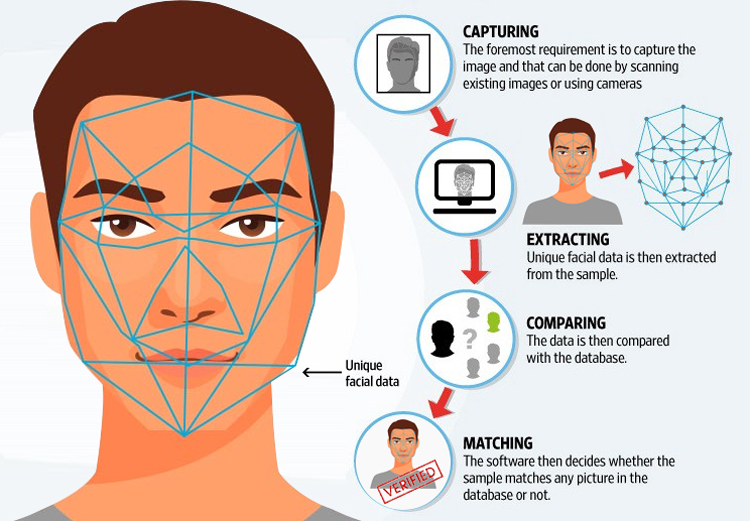 The development of technology is helping people to adopt new methods for management. One of the best method for effective management is through face detection. The face detection software is used in biometric verification. Face detection measures the distance between eyes, the width of lips and the distance between lips and nose. The application has power to identify one face from millions of other people in just seconds. The technology also has the ability to identify the gender.

The year 2018 is considered as the landmark for face recognition because there has been huge progress on machine learning. The development of this latest technology with the precision, makes it best for surveillance.The Smart City Lab has worked on face detection and also developed a face check application. The idea of working on the application was to help managers to follow an easy way for management by marking attendance at office or detecting the stranger entering the building and to covertly track the movements.

Foreign countries are using this latest technology to generate data on customers. The technology is effectively used in churches and at schools to monitor attendance.This feature can be cost effective by reducing the amount of work force. It helps to make a record of the employees at the office and calculate their performance by measuring the punctuality on job.The technology is effectively used for finding the people who have warrants out for arrest and for people to pay on fast foods and to access theme parks without buying the tickets. The technology can be used to generate text only through the picture to describe the features.

This latest advancement of AI through machine learning is changing the concept of privacy, trust and fairness. The tech companies are working constantly to add news features to face recognition and detection.

The Smart City Lab at NED University has successfully developed a module of number plate detection using their own data set. The module gives 85 percent of accuracy and can be used for security and effective management.Through the module of the number plate detection, a record of all the vehicles passing by the camera can be stored. The module is extremely effective for government agencies, police departments, buildings, shopping malls and parking area.

In the police department the number plate detection can be used to keep a track on the vehicles. It helps to detect the stolen vehicles and help in executing felony warrants. Police can easily track the criminals and identify any suspicious activity through the detection of number plate. It helps to detect the black and the white listed cars, track the uninsured vehicles, solve cases of terrorism and other organized crimes.


The number plate detection can be used for government agencies and buildings where there is secured and gated entrances. It helps to identify the vehicles which are permitted to enter the premises making the work of the security personnel easy.

The number plate detection can be used in shopping plaza and parking area by informing about the crowded parking so that the management can know where there is need to expand the facility. It helps in effective management by helping the staff to know where the facility needs to be strong. The module helps to detect the heavy traffic flow of the vehicles. 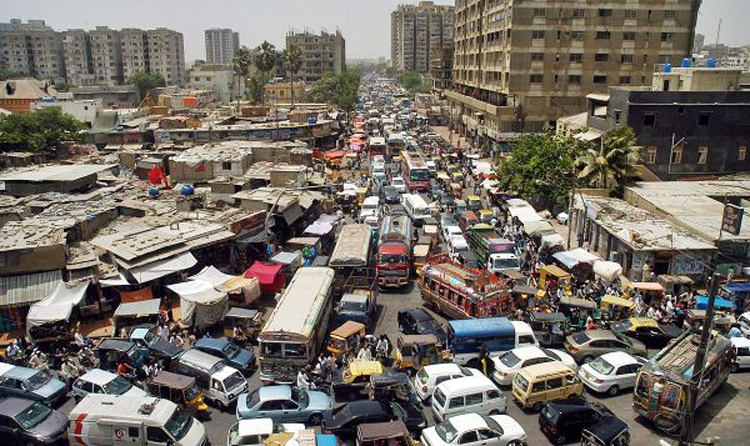 Traffic congestion not only causes environmental degradation but also affects the overall health of citizens. Because of traffic congestion, it becomes difficult to carry out routine activities. It also has adverse effects on the economy; officers, workers, and businessmen stay stuck in the traffic for hours, negatively impacting their ability to perform.

The Smart City Team is working on a traffic management system using artificial intelligence and IoT. The team conducted a detailed research on how traffic congestion financially affects an economy.They installed cameras on one of the busiest roads in Karachi – University Road – and visually observed the vicinity. The purpose was to calculate the difference between how much fuel vehicles consume during high traffic hours and how much do they consume during low traffic hours. It was found that vehicles consume twice as much fuel during high traffic hours, than what they do in low traffic hours.

The team also calculated the cost spent on reducing the emissions and other environment protection schemes. To calculate the cost spent, the team targeted the same road, and studied how much cost is spent to make the environment better of that particular vicinity.

The purpose of the research was to highlight the fall outs of traffic congestion, especially those related to health and economy. The findings were that the estimated cost of fuel consumed due to 10 minutes delay can be around 22.90 Million PKR/Year. The cost to overcome Carbon dioxide emissions by planting pine trees, could be around 37.73 Million PKR/ Year.

Considering the research targeting the University Road, the team has made an estimate loss that could be cost because of traffic congestion in the city. They have found that the total loss cost due to congestion is 95.62 Billion PKR/Year for 15 minutes delay in Karachi. The estimation is based on also the report studied by the World Bank. According to the report, the health cost of ambient air pollution alone is 65 billion PKR/ Year.

Some of the factors that can be considered to avoid the delay could be the repair and rehabilitation of roads causing congestion, reduction in diesel using vehicles, strict traffic rules implementation. Other ways can be by introducing the Hybrid vehicles, avoiding land degradation, installing smart cameras and using Artificial Intelligence. Plantation and real time traffic feedback can also be the part of long-term plan.

At Smart City Lab, expert AI Engineers and Data Analysts are working together on different domains that will help solve problems commonly faced by citizens. The Engineers in the lab are constantly working on different techniques which can be used by organizations to achieve strategic planning.

To accomplish this goal, the Smart City Lab is designing maps. These maps will be different from those commonly used, as these maps will not only be used to find locations but also extract information related to people, crime and environment.

The intelligent GIS will bring a significant change by changing the traditional ways of planning and designing. Whether one is working towards crime control or to improve quality of health, data is extremely important to take vaious actions. The GIS will provide data related to the prevalent crime rate and health conditions of the city.

As a result, these smart information maps will also help in decision-making. For example: the management board can take quick decisions related to waste disposal from areas showing high presence of garbage. They will also help locate green areas and identify places where there is need for more plantations. Information related to weather of different areas can also be seen on the maps. The maps will also be showing results based on social surveys which could help in Policy Making. Through these maps, the analysis of the complex data can be made simple by extracting data, setting plans and comparing the results achieved.

The latest technological advancement is making people more dependant on machines. The machines are designed in such a way that it can perform multiple functions using the Internet of Things (IoT), which helps in bringing the diverse information together.
The Engineers at the Smart City Lab has developed the IoT devices that can be used to make the products cost efficient and improve its performance. These IoT devices are deployed as part of Aqua Agro Smart Irrigation System. The IoT devices when deployed in the field, helps in the transfer of data through sensors from one device to another along with accumulated data uploading to internet by central hub device. This is also known as the Wireless Sensors Network (WSN). 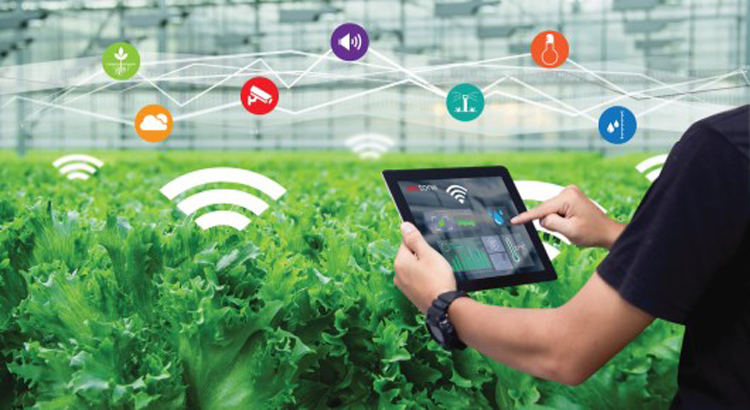 The IoT devices make Aqua Agro more durable and extremely beneficial for the users. Through these devices, farmers can check the soil before growing the crops. Farmers can get information about the type of the land and the crops suitable to grow. The devices can easily monitor the environmental conditions and soil parameters such as ambient temperature, humidity, soil temperature, soil moisture and soil EC. The devices are capable of covering multiple crops in a particular area.

The smart irrigation devices with IoT will reduce human efforts and save time. These devices will manage large area with a limited cost. The investment per acre is also reduced. The devices help to nourish the crops. It also helps to combat water crisis by harvesting more crops with smaller amount of water resources.

The world is experiencing the era of Artificial Intelligence where jobs are assigned to Robots and people are working on innovative and creative ideas to make their lives much better. The Smart City Lab - NCAI is also going with the flow and working on such projects which are needed in our daily lives and beneficial to educational institutes, healthcare and industrial sectors. Some of which are as follows: Developing collision avoidance module for smart vehicles, IoT devices developed by the Smart City Lab are making Smart Irrigation cost effective, Making strategic planning easy through Geographic Information Systems, Face Detection-One Solution for an Effective Monitoring, Ratcheting up security using Vehicle Detection System, Impact Of Traffic Congestion and Vehicle Detection And Classification.